Honoring Our People, Stories, and Land

Prior to the existence of North Seattle College, there is a long history of people and stories on this land. As occupiers of this land—the ancestral home of the Coast Salish People, it is our responsibility to honor this heritage and to tell the stories of all people. However, we must acknowledge that the work of learning and documenting our history is a continuous work in progress in which we value diverse perspectives and inclusivity. We invite others to join us in this endeavor by sharing their stories and information.

A Land of Many Stories

North Seattle College occupies land which reflects a long, colorful, and difficult history. The landscape was formed in a unique geologic setting at the end of the last ice age and has hosted the Coast Salish people and their ancestors since shortly thereafter. The land was taken from its Native stewards by the United States government under the Treaty of Point Elliott of 1855, and the area of North Seattle was put up for sale in 1869. In 1870, the future college land was purchased by Arthur and David Denny, co-founders of Seattle. Much of the modern campus sits on land that was originally a marsh, which was drained shortly thereafter.

By the early 1900s, the land had been transformed into farmland and new housing developments. The community on the north end of the campus was known as “Licton Springs Gardens.” Like most of what would become North Seattle, property ownership was restricted by redlining and other practices which excluded minority groups. By the 1920s, part of the land NSC now sits on had become the Kumasaka family farm and a key center for a large local Japanese-American community in this area.  It remained that way until its residents were forcibly relocated over World War II, under the Japanese-American exclusion policy.

In the post-war years the community grew with suburban development, but its future was rendered uncertain as the Northgate Mall opened in 1950, which was arguably the first modern suburban mall in the country. In the early 1960's, the national push for a more robust interstate transportation system led to half of the community being bulldozed to make way for Interstate 5 in the early 1960s. In 1968, facing a growing "baby boom" population, along with demands for more equity and access to higher education, North Seattle College was slated for construction. The State took the neighborhood properties by eminent domain, and the College opened its doors in 1970.

The college occupies land which, on the arrival of the first non-native settlers, was part of the traditional lands of the Xa Chu’absh people. They occupied villages around the north end of Lake Washington, including a village at the mouth of Thornton (Ttuxu:bid) Creek. They visited this area each fall, to collect wild cranberries and other materials from a marsh (“hLoo QW’queed”) which formerly occupied this basin. They also regularly came to visit Licton (lee’ Qtud) Springs, which was an important spiritual site. Even after most of the Native American population was relocated to the reservations as a result of the treaties of the 1850s, some of the Xa Chu’absh people remained in their villages and continued to use this area. They remained until 1916, when the level of Lake Washington was lowered as a result of the canal system at Montlake and the Hiram M. Chittenden Locks in Ballard, and the estuaries which had supported them dried up.

The present-day Duwamish tribe has a strong presence in the area, but unfortunately is not federally recognized. In the absence of this recognition, funding and human services, the nonprofit Duwamish Tribal Services (DTS) was created but has struggled to provide numerous social, educational, health, and cultural programs during the past 35 years. The Duwamish Tribe currently has around 600 enrolled members. Many more people have Duwamish ancestry but have chosen to enroll with federally recognized tribes, in order to obtain health and other human services, according to the DTS. 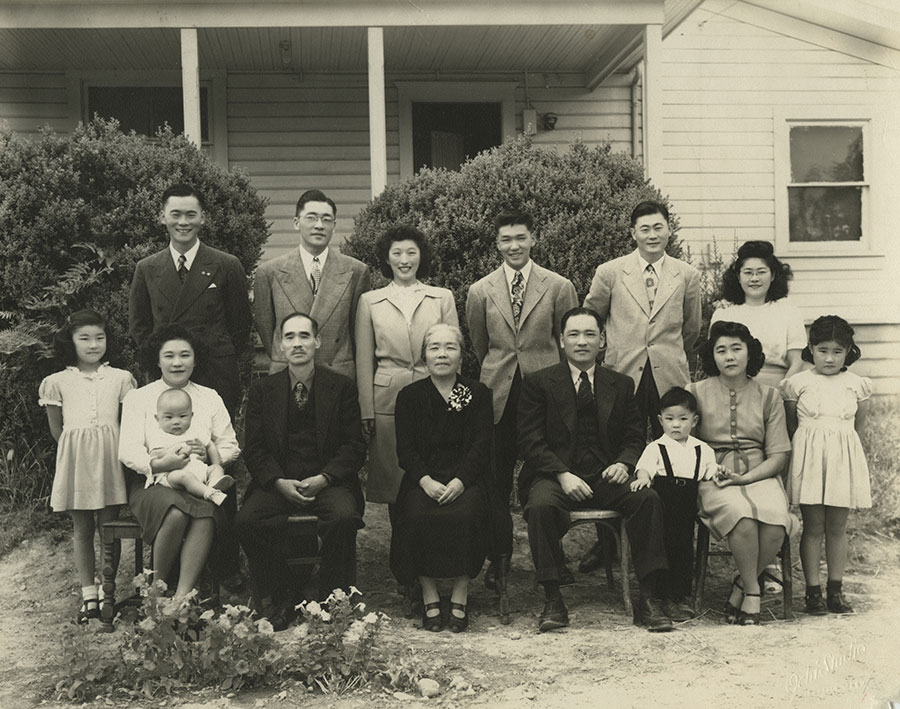 The north end of NSC campus was formerly the site of a greenhouse farm run by Shoji Kumasaka, which was the center of a large local Japanese American community in the years before World War II. Many of the residents had originally come to work in the sugar beet fields of Utah and Idaho around the turn of the century, and the Kumasaka family moved here from the Green Lake area in the years after World War I. Their property hosted a community center, which originally served as a Japanese language school. Later, it was expanded to become a center for community events, sports leagues, and other popular pursuits. Shoji was an important leader in the Seattle Japanese-American community.

The Kumasaka family, along with the entire Japanese-American community, was forced to leave their homes for internment camps over World War II, under Executive Order 9066. They were ordered to take only what they could carry, and most did not return after the end of the war.

The Kumasaka family did return, and continued to run their farm. Years later, her family was forced to sell the land to make way for the state’s desire to build a community college. Bea told former NSC President, Warren Brown, that her mother played a crucial role in organizing the neighborhood to ensure a fairer price for their land. “My mother took it in hand, went around and talked to all the neighbors, and said, ‘I will negotiate for the prices and if you stick with me I will guarantee that I’m going to get better prices for us than what they have offered,’ and that did come true,” shared Bea. Along with the rest of the properties in the community, their farm was purchased for the college in the late 1960’s.

Bea also reflected on a transformative moment in her family, when the power of education was realized. In fact, Bea herself enrolled briefly as a student at North Seattle College. Her aunt, who graduated from Lincoln High School in 1934, was awarded a scholarship to Stanford, where she eventually graduated with a degree in microbiology. “That was a pivotal moment in our family history,” Bea said. “Because what it showed the family, is there is educational opportunity for all of us. We could all go to college.”

We believe education is fundamental to transforming lives—not only for the student who receives it, but for their family and generations who come after. Moreover, it is transformative for the College and the community around us. We see this, among other examples, in the way Licton Springs has transformed itself from a socially engineered segregated neighborhood to a more diverse community striving for greater inclusion and equity.

As we commemorate the past 50 years of North Seattle College’s history, we are humbled in recognizing that our history extends well before NSC opened its doors, and that we are stewards of land that holds a long and rich history for the Duwamish people. We seek to honor their memory while on this land and strengthen the future of Duwamish youth who want to better their lives through education.

On behalf of North Seattle College, we acknowledge that we occupy the traditional ancestral lands of the Coast Salish peoples, specifically the Duwamish Tribe—a people that are still here, continuing to honor and bring to light their ancient heritage. Without them, we would not have access to this gathering, dialogue and learning space. We ask that we take this opportunity to thank the original caretakers of this land who are still here.

We recognize that enslaved and indentured peoples were forced into unpaid and underpaid labor in the construction of this country, state and city. To the people who contributed this immeasurable work and their descendants, we acknowledge our/their indelible mark on the space in which we gather today. It is our collective responsibility to critically interrogate these histories, to repair harm, and to honor, protect, and sustain this land.

Beyond Acknowledging the Land

What Can You Do?

North Seattle College’s Office for Equity, Diversity and Inclusion is dedicated to dismantling institutional practices, polices, and infrastructure that are the root cause of equity gaps. While leading with mindfulness practices of peace, modeling love, and giving grace to all.